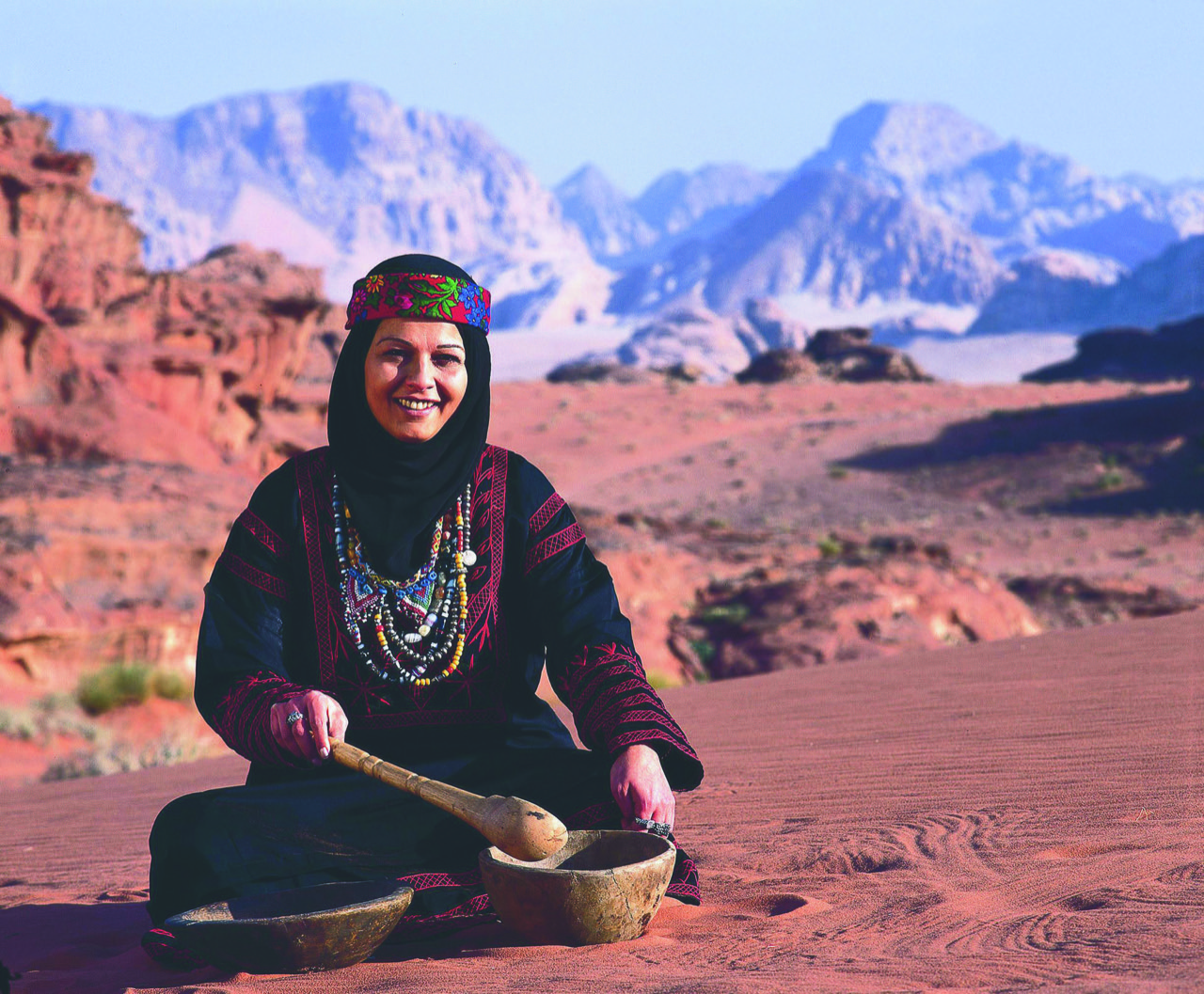 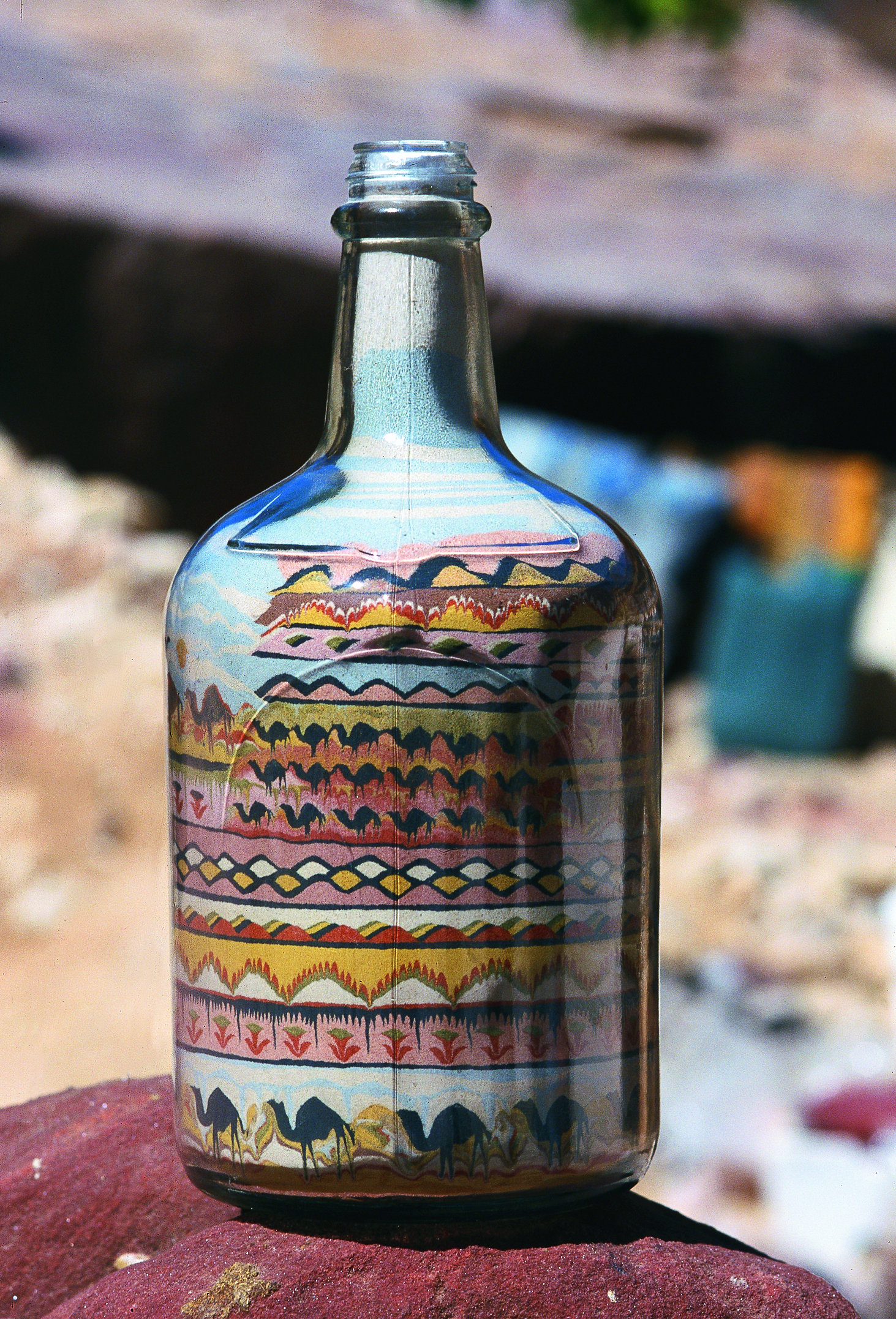 Handicrafts
Jordan has become famous for the high standard of crafts available to tourists and local people alike. A wide variety of crafts fill the shops of Amman and the bustling bazaars of the smaller towns and villages, far from the capital. Crafts such as pottery, jewelry, embroidery, carpets, and traditional costumes are also found around Amman are some of the finest glass blowers who continue to create fabulous glass objects in styles typical of the region. The nomadic Bedouin’s flocks of sheep are fine providers of wool, woven on small looms, and made into all types of goods. One of the most rewarding purchases to make is that of an Arab Oriental rug or carpet. Every rug has its own intrinsic character, its own special feel and unique design.

Mosaics of Jordan
The ancient art of the mosaic consists of pressing ceramic or glass fragments (known as tessera) into wet plaster to create detailed and ornate works of art. These creation unite form with function, decorating churches, monasteries and public gathering places with stories, maps, writings and murals. The mosaics are invaluable in providing historians with the names and dates of important historical figures and events, all of which aid in delineating the ancient history of Christianity in the area. The mosaics of Jordan most frequently originated during the Byzantine-Umayyad period, from the fifth to the eighth centuries AD.

Ceramics
Probably the most ancient craft in Jordan is the creation of earthenware products out of silsal (Arabic for clay). Pottery was first invented in the Levant in the 6th millennium B.C. and, according to some, its invention may have been accidental. A lump of clay may have been mistakenly dropped into a fire, and when the ashes cooled, the astonished discoverer noticed that the clay was hard as a rock! Traditional ceramics from the West Bank city of al-Khalil (Hebron) have influenced Jordanian pottery making. Coarsely-fired vases, pots and plates are placed on a rotating wheel. Then, the artist makes his or her choice of brushes and colors, and begins to paint. Each artist tries to out-master the others, and the styles of the greatest are imitated by other craft persons.

Embroidery
This is one of the most important traditional crafts of Jordanian women and has, in recent years, been incorporated into high fashion. Elegant gowns and jackets have been created using traditional needlework together with rich, Middle Eastern fabrics and these designer collections are frequently modeled on the catwalks of Jordanian hotels.

It all began much more simply, however, with the young Jordanian girl learning the craft of embroidery in her village and often being judged through her skill on the quality of bridegroom she would attract. Every Jordanian girl from every social class at one time embroidered her own trousseau, which consisted of between six and twelve loosely-cut robes and which lasted her for a lifetime.

This art of embroidery has been carried over into the making of cushions, which grace the décor of many Jordanian homes. Colors range from shades of red, maroon, purple, and pink, with bright additions of green, orange, and gold. Simple cross-stitch is the basis for a plethora of complicated designs and recurring motifs include trees, flowers, feathers, waves, and geometric zigzags or triangles. More recently, embroidery crafts have developed to include quilts.

Weaving
In the past, both nomadic Bedouins and villagers created hand woven rugs using ground looms or upright looms. This handicraft began to fade away as the Bedouins started to settle. In order to preserve the art, however, Jordanian artisans worked in partnership with the Save The Children Charity Organization and the Noor Al-Hussein Foundation to establish the Bani Hameeda Project, a self –help rug weaving “Cottage Industry” which provides independent supplemental income for rural and urban women. Jordanians continue to weave handmade rugs in the traditional dark shades of green, red, black and orange, although in recent years light pastel colors have also become popular.

Glassblowing
Like ceramics, glass blowing is a craft, which combines practicality with beauty, the craft of glass blowing has been perfected over 2000 years, but today it is a dying art in the Middle East. It takes years of practice for craftsman to master the art of glass blowing. With a hollow pipe he scoops up a lump of oozing glass and, while continually rotating the glowing orb, blows through the pipe. When he has expanded the glass to its desired size, it is then put in a special chamber to cool down from the 900 C furnace. The traditional center of glassware artistry in the region is Hebron. However, some of the finest of all Hebron glass blowers can now be found in and around Amman. Today in Jordan, one finds vases, bottles and glasses handcrafted in magnificent royal blue and rich green blown glass.

Sand Bottles
For decades, bottles filled with brightly colored sand have been made by artisans in Aqaba and Petra. The bottles are inexpensive, and their playful patterns unique to Jordan. It is said that a Petra Native, Mohammed Abdullah Othman, taught himself the craft as a child, collecting his material from nearby mountains and caves. Since there are more than twenty natural occurring shades of sandstone, Othman and his imitators have no need for dyes.

Music
Music is also important in Jordanian life. Traditional Arabic music is based on a five-tone scale, unlike our Western seven-tone system. The rhythms are elaborate. Songs often tell stories of family, honor, love and death. Most instrumentalists accompany a vocalist rather than playing on their own, and improvisation is common. Some Arabic instruments include the oud (similar to a lute), the mizmar mujwiz or nay (both types of flute), the rababah (a type of violin with one string), and the gerbeh (like bagpipes). Small drums, played on the lap, are used to keep the rhythm. American pop and rock music is popular with younger Jordanians.

The Oud
The oud (or ud) is one of the most popular instruments in Middle Eastern music. Its name derives from the Arabic for ‘wood’, and this refers to the strips of wood used to make its rounded body. In Greece it is known as the outi and in Iran as the barbat. The neck of the oud, which is short in comparison to the body, has no frets and this contributes to its unique sound. The most common string combination is five pairs of strings tuned in unison and a single bass string, although up to thirteen strings may be found. Strings are generally made of nylon or gut, and are plucked with a plectrum known as a risha or mizrap. Another distinctive feature of the oud is its head, with the tuning pegs bent back at an angle to the neck. The oud used in the Arab world is slightly different to that found in Turkey, Armenia and Greece. Different tunings are used and the Turkish-style oud has a brighter tone than its Arab counterpart. The European lute is a descendant of the oud, from which it takes its name (al-oud).

A Historical Perspective of Jordanian Stamps
Up till the year 1918 and during the Ottoman Empire’s rule over Jordan, the only postal stamps used were Ottoman issues. In the years 1919-1920 and during the reign of the late King Faisal a new collection of stamps was issued bearing the Arab Kingdom emblem. The establishment of the Emirate of Trans-Jordan made way for the introduction of Syrian stamps instead of the previously utilized Arab Kingdom ones. It was not until 1922 that a Jordanian citizen created a postal seal bearing the name of the Emirate of Trans-Jordan marking the establishment of the state.

Five years later and in 1927 the first postal stamp with the picture of the late Prince Abdullah Bin Al Hussein was issued. The first Jordanian stamp collection to appear was in 1932 with various pictures of historical monuments and archaeological sites in addition to different pictures of Prince Abdullah I. Stamp collections continued to be produced to commemorate historical events such as the declaration of independence in 1946, the establishment of the Parliament in 1947, and the union of the East and west Banks of Jordan in 1952 and HAM the late King Hussein coronation in 1953. New stamps were issued in a rate of 6-10 times a year depending on the frequency of national and international events.

Jordanian Cuisine
Rated among the finest in the world, Jordanian cuisine, while unique, is part of the Arabian culinary heritage. Food in the Arab world is more than simply a matter of nourishment. Feasting is a preoccupation and food is often at the center of social customs. In fact, eating rituals are very important throughout the Middle East, and, as a guest, you can be assured vast platters of succulent and nutritious food will be produced to honor your visit. A ‘Jordanian invitation’ means that the guest is expected to bring nothing and eat everything provided by the host.

Dishes will satisfy even the health conscious, as many of them are prepared with grains, cheese, yogurt, fresh and dried fruits and vegetables. Rice, flat breads, legumes, olives, lamb or chicken, yogurt, vegetables and fruits are the staples for most meals. In addition, rice is the major ingredient of many dishes.

The national dish of Jordan is the Bedouin specialty called “Mansaf” – lamb seasoned with aromatic herbs, sometimes lightly spiced, cooked in dried yogurt, and served on a large platter with huge, quantities of rice, sprinkled with almonds, pine kernels, and other nuts. Feasting on Mansaf is taken seriously, and hours are spent in preparation. This extravagant cuisine is served primarily on special occasions such as weddings, birthdays, and anniversaries, as it possesses an important symbolic function within social gatherings.