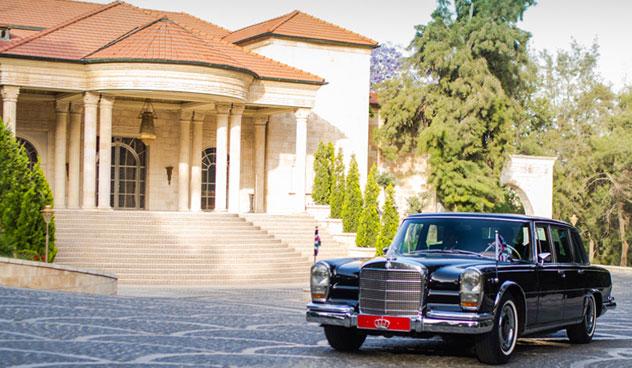 Jordan boasts historical, military, cultural, artistic and community museums that showcase its importance across consecutive historical eras and civilisations. These museums also document the path of prosperity and achievements in Jordan since the establishment of the state under the Hashemite leadership.

There are 15 museums in Jordan showcasing artefacts, traditional and military costumes, weaponry and machinery used in the Arab Army’s battles or owned by the Royal Hashemite Family, photographs and replicas showing Jordanian soldiers in various army formations and an archive that relates the heroic actions of Jordanian figures. Museum collections also include ancient coins and banknotes, jewellery, artwork and certificates of scientific achievements.

The Ministry of Culture has launched a project to convert the old Parliament building into a museum, due to the political and social history connected to this landmark, which tells the story of Jordan from 1947-1979.

The initiative of reviving the old building, maintaining and restoring it in accordance with museum standards is aimed at acquainting Jordanians with their country’s rich history and its collective memory, involving all the people of Jordan and its visitors from around the world in this experience.

The museum is composed of three wings: the middle wing, which includes the Parliament Hall, the right wing and the left wing.

Inaugurated in 1951, the Jordan Archaeological Museum is perched on top of Jabal Al Qalaa (Citadel Hill) in Amman. The museum showcases collections of tools and artefacts unearthed in archaeological sites in Jordan, such as ceramic, glass, wool and metal pieces. It also features statues, coin collections and manuscripts adorned with jewellery. The museum’s major possessions include plaster statues from Ain Ghazal, which date back to around 6000 BC and the copper Dead Sea scrolls, written in Aramaic.

In 2002, His Majesty King Abdullah II issued a Royal Decree to establish a national museum, and the museum’s by-law received Royal ratification in 2003.

Work to establish the museum started in 2005, when Her Majesty Queen Rania Al Abdullah, the chairperson of the museum’s board of trustees, laid the cornerstone and the board endorsed the name Jordan Museum.

The Jordan Museum is located in Ras Al Ain area, in the heart of Amman, where the main buildings of the Greater Amman Municipality and the capital’s cultural facilities are also located. It showcases the cultural and historical heritage of Jordan within uniquely designed halls. It is also a comprehensive centre of education and knowledge, offering a manifestation of Jordan’s history and culture from an innovative educational approach, telling the story of the country’s past and present and its outlook for the future. This approach is reflected in the museum’s façade, with the coarse stone symbolising the past, while the smooth stone signifies the present and the glass represents the future.

The Jordan Museum houses modern warehouses and a centre for maintenance and restoration; it also supports scientific research and publishing. Permanent and temporary exhibitions are held at the museum, which has a community programme to reach out to institutions and various segments of society. It also offers a variety of services to its guests. The museum is a centre of knowledge and education; and, at the same time, it aims to engage the Jordanian community in a dialogue of the mind that aids in facing the difficulties of the future.

The museum seeks to be a starting point that encourages its guests to explore Jordan’s cities, rural towns and Badia (desert area). It aspires to offer its visitors a comprehensive interactive experience inspired by Jordan’s civilisation and history.

Inaugurated in 1957, this museum is located on the western side of the Roman Theatre in Amman. It showcases items that represent the various cultures of Jordanian life: Bedouin culture, farm life in the rural towns and villages and urban city culture. These items include several everyday tools from the start of the 19th century and into the early 20th century, such as the typical design of men’s and women’s clothing from various areas in Jordan; and everyday tools used to prepare food, make coffee and tea and to bake bread, etc.

The museum offers a glimpse into Jordan’s contemporary history through events where Royal vehicles were used since 1916 up until today. The museum focuses on the reign of His Majesty the late King Hussein, may his soul rest in peace, offering an audiovisual presentation on that era.

This is a national museum that chronicles Jordan’s modern history. It was established in recognition of the sacrifices of martyrs as an embodiment of Jordan’s pride in them as a people and a country. The items on display cover the history of the Jordan Armed Forces-Arab Army since the Great Arab Revolt until our present day. They include replicas of weapons, ammunition and military garb. Around 70,000 people from around the world visit the memorial annually.

The facility includes three main wings that narrate the story of the Great Arab Revolt, the establishment of the Jordan Armed Forces-Arab Army, the independence of the Kingdom, the military advancement of the Armed Forces and the latest military and political events, especially the battles fought by the Arab Army.

The building was officially inaugurated on 25 July 1977, as part of the Kingdom’s celebrations of the Silver Jubilee of His Majesty the late King Hussein’s ascension to the Throne.

It features a front courtyard surrounded by trees, with various military machinery and artillery that were used in the Arab Army’s battles in defence of Palestine and Arab causes on display. In the back garden, a Hawker Hunter fighter jet is on display from the Royal Jordanian Air Force’s battle in Samu in 1966, when it was piloted by Captain Ihsan Shurdam, who used it to down two Israeli fighter jets.

The upper parts of the memorial’s outer walls are emblazoned with Quranic verses written in gold, glorifying martyrs and calling for martyrdom for the sake of God and the homeland.

The Royal Society of Fine Arts founded the Jordan National Gallery of Fine Arts in Amman’s Jabal Luweibdeh in 1984, when the temporary exhibition wing was inaugurated.

The museum seeks to:

The Gallery has notably expanded, starting with a collection of 50 artworks and increasing them into 2,000 pieces, produced by 520 artists from 43 Arab and Muslim countries: from Brunei on the Pacific Ocean, to Morocco on the Atlantic Ocean, to Turkey and Iran on the Caspian Sea, in addition to Pakistan on the Indian Ocean.

The Royal Society of Fine Arts has also organised over 50 exhibitions in Amman in cooperation with art institutions in Europe and America. It has loaned items to Turkish museums and to the Egyptian Modern Art Museum in Cairo. It has also loaned collections to other establishments in the Arab world to be shown in temporary exhibitions, in addition to holding major exhibitions in France, Turkey, Poland and Britain.

The exhibition was inaugurated in 1992 at the Department of Antiquities in Amman, with the aim of highlighting Jordan’s role in Arab heritage throughout the ages and showcasing recent archaeological discoveries.

On display are precious artefacts, ceramics, glass pieces and weapons that date back to the Bronze Age and the Nabataean and Roman eras. Its collection also includes gold Islamic coins and inscriptions as well as silver Ptolemaic treasure discovered in Iraq Al Amir area. In addition, mosaics dating back to the Byzantine era and the early Islamic era, unearthed in various areas around the Kingdom, are on display.

Moreover, the exhibition houses replicas from the architecture of the Temple of the Winged Lions and Qasr Al Bint (the Temple of Dushares) in Petra, in addition to the limestone heads of the nymphs discovered in the Nymphaeum in Amman. Recent archaeological discoveries unearthed by the Department of Antiquities are put on display after they have been studied.

This museum was established in 1971, in the eastern side of the Roman Theatre in Amman, with the goal of documenting Jordanian and Palestinian folklore, safeguarding it for future generations and presenting it to the world.

The museum includes five showrooms. The first highlights East Bank traditional costumes, while the second one shows traditional jewellery and cosmetics from various areas in the East and West Banks. The third showroom features a collection of Palestinian costumes and head covers, whereas the fourth one contains a collection of traditional cooking ware made of pottery and wood, in addition to a collection of silver jewellery and clothing, as well as bridal wear from the West Bank. The fifth showroom, which is in the cellar of the Roman Theatre, features a number of mosaic pieces from Byzantine churches in Jerash and Madaba.

This museum, with a collection of 2,200 coins, specialises in coins minted in Jordan and the Arab region in ancient times, highlighting the type and form of the coins used in the Near East since the 4th century BC.

Jordanian money from various historical eras takes up a large part of this museum, starting with the coins used in the Decapolis cities, in addition to the Nabataean period and the coins minted in the Byzantine and Islamic eras.

The museum also features a special wing for coins and banknotes that document Jordan’s modern history, since the eruption of the Great Arab Revolt, led by Sharif Hussein bin Ali, arriving at Faisal’s rule in Syria and Iraq, and also including what has been issued in relation to the modern Jordanian state since its founding.

Established by the Jordan Ahli Bank in 1999, this 400 square metre museum is located within the bank’s management building in Amman’s Shmeisani area.

The Children’s Museum Jordan is a non-for-profit educational institution launched as an initiative by Her Majesty Queen Rania Al Abdullah in 2007.

The museum is located within Al Hussein Park, and it extends over 7,000 square metres, offering more than 150 permanent exhibits inside and outside its building, in addition to educational facilities, such as the library, the tinker lab and the art studio. By offering interactive exhibits and educational programmes all year round, the museum seeks to provide an interactive educational experience for all children and their families regardless of their education, background or place of residence.

The museum is always working on designing new educational programmes, in addition to maintaining and developing its current exhibits, in order to present a qualitative, interactive educational experience.

This museum was established alongside the University of Jordan in 1962, before it was later expanded and transferred to its present location on Citadel Hill. It seeks to serve the educational process at the university by introducing visitors to Jordan’s heritage over the ages and increasing cooperation with national and international scientific institutions. The museum works to develop research, functioning as a practical lab for teaching applied sciences in archaeology. It includes showrooms, workshops, photography rooms and a lab for the conservation of the various exhibits.

Founded in 1977, at the University of Jordan, the goal of the Anthropological Museum is to connect theoretical information that students study at university with everyday life by researching social life among the Jordanian community. Students are encouraged to bring items donated by their families to put on display, including items that were used for various everyday purposes, such as cooking and food utensils, furniture, clothing and agricultural tools used by farmers in the early 20th century.

This house belongs to the renowned Jordanian Abu Jaber family, and it is one of the heritage houses in the downtown area of Salt’s old city. Dating back to the late 19th century, it highlights a side of the first cultural developments at the time of the Emirate of Transjordan.