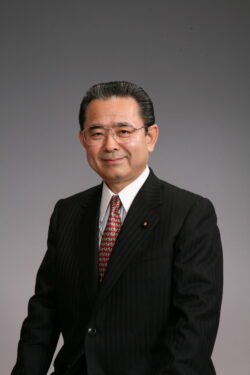 Following the congratulatory message from the Hon. TANAKA Kazunori, Chairperson of the Japan-Jordan Parliamentary Friendship League, on the occasion of Jordan’s 76th Independence Day Anniversary (published in the Japan News on the 25th of May 2022):On behalf of the Japan-Jordan Parliamentary Friendship League, I extend my heartfelt congratulations to our longtime friend, the people of the Hashemite Kingdom of Jordan, on the occasion of their National Day.

It is my great pleasure to see excellent bilateral relations between Japan and Jordan based on the time-tested and multi-layered ties of friendship developing ever since the establishment of diplomatic relations in 1954. Anyone can understand how close they are by the mere fact that Japan has the honor to welcome His Majesty King Abdullah II for more than 10 times. I hope that the next visit will be realized in a near future.

In this regard, then Foreign Minister Motegi’s visit to Jordan last August was a good opportunity to revive the mutual visit of dignitaries. As the Chairperson of the Parliamentary Friendship League, I spare no effort to invigorate the exchanges of parliamentarians of both countries as the world moves toward the post-COVID19 era.

The international community now faces unprecedented crisis in Ukraine, but the peace and stability in the Middle East is no less important. There is no doubting that Jordan is a keystone for this purpose. Japan will continue its contribution, hand-in-hand with Jordanian friends, to the Middle East peace including through our unique initiative of the “Corridors of Peace and Prosperity”.

By working together, I strongly believe that Japan and Jordan can overcome current difficulties, which will cement further our prosperous and long-lasting partnership.